skip to main | skip to sidebar

The Escapist is, of course, Joe and Sammy's tribute to Harry Houdini, the greatest escape artist of all, who had a talent for freeing himself from handcuffs, chains, ropes and straitjackets, sometimes while hanging upside down from a rope. In his Chinese Water Torture Cell trick, he was plunged head first into a glass-and-steel cabinet filled with water and held his breath for more than three minutes as he worked to free himself. His spellbound audiences were sure he would drown.

"The easiest way to attract a crowd is to let it be known that at a given time and a given place some one is going to attempt something that in the event of failure will mean sudden death," Houdini once said. 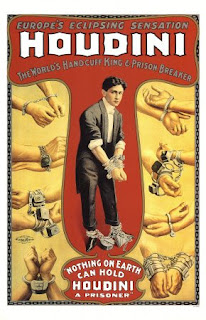 I forgot why I'm writing about Houdini. This is a blog about good girls....Oh, hang on, that's right. There is a good girl in Chabon's book: Rosa Saks, a dusky chain-smoking artist who first catches Joe's eye when he sneaks into the room where she's sleeping, naked. Joe had thought the apartment he was breaking into was empty, and now he's enchanted by the sleeping girl, who is as yet a stranger to him.

Smitten, he remembers every detail of the scene and later draws it:

Her right foot loomed large in the foreground, slender, toes curled. The lines of her bare and of her blanketed leg converged, at the ultimate vanishing point, in a coarse black bramble of shadow. In the distance of the picture, the hollows and long central valley of her back rose to a charcoal Niagara of hair that obscured all but the lower portion of her face, her lips parted, her jaw wide and perhaps a bit heavy. It was a four-by-nine-inch slice cut fresh from Joe's memory but, for all its immediacy, rendered in clean, unhurried lines, with a precision at once anatomical and emotional: you felt Joe's tenderness toward that curled little foot, that hollow back, that open, dreaming mouth drawing a last deep breath of unconsciousness.

The three main characters of this wonderfully cinematic novel eventually grow wrapped together into a triangle of great sexual complexity, sadness, love and loss--much as you would hope from a wonderfully cinematic novel. (I hear a movie is underway, but I don't want to Google it, because I don't want to know yet who they're going to cast. Hollywood can ruin the images a book creates in your head.) Rosa becomes the ultimate figure of womanly strength and beauty for Joe and Sammy, and they turn her into a comic book character called Luna Moth.

Miss Judy Dark, Luna Moth's alter ego, is a mousy, spectacles-wearing librarian who works in the basement of the Empire City Public Library. But one weird night, as Miss Dark is on her way home to a solitary dinner with nothing but the radio for company, she catches a couple of crooks in the act of stealing an ancient and magical text. She grabs the books from their hands, runs, a gun gets fired, a wireline falls into a puddle of water, and a powerful surge of energy races from the book's golden cover into Judy Dark's slender frame.

Poof! In one magical instant, Judy Dark is transformed from a mousy librarian into Luna Moth, Mistress of the Night, a flying creature with massive, translucent green wings and massive breasts plus an otherwise perfect body needless to say. She has become a warrior goddess who flies around, stops criminals by zapping them with green energy rays, and doesn't really know how to control the unbridled force of her lusty imagination. It's a classic good girl turns bad girl turns good girl scenario, guaranteed to give young comic-book readers a sexual thrill. 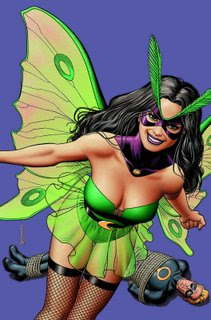 So that's about it, except to say that Harry Houdini was very much in love with his wife, Bess. When he met Wilhelmina Beatrice Rahner in 1894, he was a 20-year-old magician who still didn't really have his act together yet, and she was a gorgeous showgirl in a singing and dancing act starring as one of the Floral Sisters in West Brighton Beach, which I live close to, by the way, and saw the Brighton Baths before they were torn down to make way for a bunch of garish "luxury" condos on the Brooklyn waterfront, or maybe they met in Coney Island in 1893, another story goes, and Coney Island also is currently in danger of losing its charm thanks to a bunch of rapacious real estate wheeler-dealers of which there are no shortage in NYC.

Where was I? Bess Houdini, right. And the highly-smitten Harry. It seems that these escape artists and escapist comic-book readers always need to have a Bess or a Luna around to add to the fun. In Harry Houdini's case, she became his faithful assistant and helped lock him up with various handcuffs, manacles and shackles, not to mention ropes and blindfolds, which I'm sure led to some exciting shenanigans in the bedroom after the show.

Sadly, as is often the case, Bess outlived Harry by many years. In 1926, he was sucker-punched in the stomach by a rabid fan and never recovered. But the Houdinis had a good run of 30-plus years, and for many years after Bess would hold seances on the anniversary of Harry's death to try to connect with his spirit. After ten years of failing to connect, she finally gave up the ghost, telling Time magazine that "ten years is long enough to wait for any man." 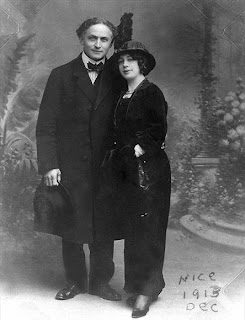