skip to main | skip to sidebar

I've been reading up on Norse mythology and keep thinking about one Viking lass, Signy, whose story is a strange one. (I have a distant Swedish cousin named Signy, which adds to her appeal for me.) Signy did all the wrong things for the right reasons, or maybe it was all the right things for the wrong reasons, but either way her messy life ended at an early age.

Here's the story of Signy:

Signy was the daughter of Volsung, and the husband that her family forced her to marry, King Siggeir, killed him and kidnapped Volsung's ten sons, chained them up, and left them to be eaten by wolves. When only one the youngest brother, Sigmund, remained, Signy freed him and vowed to avenge her father and other brothers' deaths. 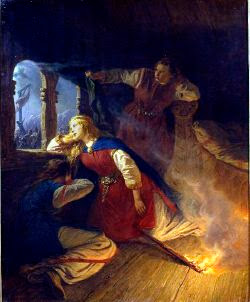 She did this by visiting Sigmund several nights in disguise, sleeping with him, and getting pregnant. She had a son, Sinfiotli, who grew to manhood not knowing his true father's identity. All the while, Signy continued to live with her husband, bearing his children and waiting for the day she could destroy him.

When Sinfiotli was grown, Signy sent him to live with Sigmund, and the two men hatched a plan. They made a surprise attack on Signy's home, killing her other children with a magic sword and setting fire to the house while the husband was inside, still alive.

Signy was there, watching the attack, and when it was done, she revealed her secret to Sinfiotli and Sigmund and told them the family's honor was avenged. Then she walked into her burning house and died in the flames, alongside her husband.

So. To recap: Signy slept with her brother, tricked him and their son into killing her husband and children, then committed suicide. That's Norse mythology for you--we're all doomed and the struggle against the forces of evil is hopeless. We fight, but death is inevitable.

I recently got a fortune cookie whose message sums up the morality tale that is Signy's story: "What's vice today may be virtue tomorrow." Or maybe she was just pissed off that her family made her marry the wrong guy.
Posted by Joyce Hanson at 2:17 PM